LARRY BANG BANG SHOULD HAVE HIS OWN TV STATION. NOT A YOUTUBE CHANNEL OR VIMEO THING, A TV STATION… BROADCAST ON PUBLIC ACCESS TV IN EVERY COUNTRY OF THE WORLD. I THINK A LOT OF PEOPLE WOULD WATCH IT OVER MOST OF THE OTHER STUFF ON OFFER. THE LIFE OF LARRY. HE COULD HAVE GUESTS COME IN. HE COULD COOK THEM MICROWAVED BANQUETS. AT THE END OF THE SHOW HE COULD GET UP ON THE PODIUM WITH A BAND OF OLD NOBODY-KNOWS-THEM-HAS-BEENS AND PLAY HIS CHEAP SHITTY OUT OF TUNE POORLY WIRED GUITAR AND PLAY A TUNE OUT AS THE CREDITS ROLL. MAYBE NOBODY WOULD WATCH THAT.

I MET LARRY ABOUT 10 YEARS AGO WHEN HE LIVED IN A LARGE APARTMENT BUILDING IN ZURICH PREVIOUSLY RUN BY THE MOB AS A BROTHEL. EACH DOOR WAS A DIFFERENT COLOUR WITH A BIG NUMBER PAINTED ON IT. THE FLOORBOARDS MADE A LOT OF NOISE. IT SMELT OF BURNING CHEESE AND TEXTAS. 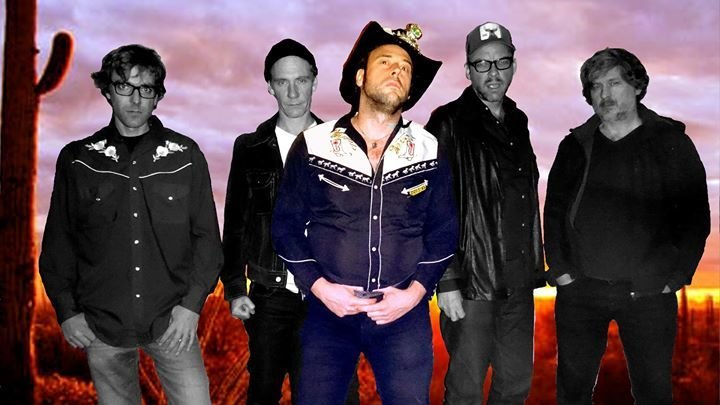 NOT MANY OF MY READERS (AND THERE AREN’T VERY MANY) MIGHT KNOW OF YOU, SO I WILL INTRODUCE YOU AS THE IMPORT-EXPORT SWISS COWBOY MARIACHI WHO HAS A PART TIME JOB DOING SOMETHING IN A ZURICH ART GALLERY AND YOU ARE ALSO A WORLD FAMOUS VISUAL ARTIST IN EUROPE. YOU LIVE IN A MINIATURE APARTMENT APPEARING TO HAVE BEEN TRANSPORTED FROM TOKYO AND ARE QUITE SUSPICIOUS OF MANY PEOPLE AND THINGS. HOW WOULD YOU DESCRIBE YOURSELF?

You got quite close already. But i’d often rather jump on my toy horse and ride very far away. I’m a neurotic, friendly and dreamy sex-maniac making serious fun for not everyone in my songs and paintings.

DO YOU KNOW THE 1980’S COMPUTER GAME “LEISURE SUIT LARRY” ABOUT THE BALDING GUY IN A SUIT WHO HAS TO SHAG WOMEN TO SURVIVE EACH LEVEL OF THE GAME?

Never heard of that. I only know prince of persia, with that most frightening bone-crashing sounds at the guillotine!! The concept sounds familiar though…

YOU RECENTLY RELEASED YOUR DEBUT LP RECORD. IT WAS A LONG TIME IN THE MAKING.

I WANT TO ASK ABOUT THE TRACK MARIANNE. IT IS AN ANTI-VITAMIN-SUPPLEMENT SONG. A BRILLIANT SONG WHERE YOU SCIENTIFICALLY PROVE THAT VEGETABLES HAVE EMOTIONS. WHERE DID THIS COME FROM?

THAT IS NOT A SATISFACTORY ANSWER LARRY…. YOU ARE JUST BLAMING SOMEBODY ELSE FOR YOUR OVERT OPINIONS, NO?

Haha, you busted me! but still a very satisfactory movie!! in the song i basically blame myself for eating animals – reverse psychology or something like that…
but at the same time i really like enjoying meat, specially when i’m in a romantic situation – all a bit schizophrenic too, it would blow up your blog to explain everything here…
.

YOU’VE BEEN TO AUSTRALIA TWICE (?) AND A LOT OF THE ALBUM IS DOMINATED BY TO REFERENCE AUSTRALIA, IT’S WHITE CULTURE, AND COLLOQUIAL LANGUAGE. WHY DO YOU THINK THIS STUFF MADE IT INTO YOUR TUNES? I MEAN, IT IS PRETTY UNUSUAL FOR A SWISS COUNTRY COMIC MUSICIAN TO PRODUCE SO MUCH AUSSIE REFERENCE.

A local swiss hero “Guz” sang already in my teenage-years about how everything is up and down over there (“in australia, in australia/ the apples fall down from the trees/into the orbit, into the the ooorbit) seen from our perspective in central europe. I hung out mostly in Melbourne, and I discovered a most appealing life-form of sexa white trash topped with creamy psychedelism in the people and their expressive art-culture there. I just felt like contributing some major shout-outs to all of that magic in some of my songs. Also, there was the opportunity to feature some of my favourite ozzy-artists with whom i share a basic understanding of musical and intellectual fun – still very proud and happy about that!!

WHAT DO YOU THINK AN AUSTRALIAN COUNTRY COMIC MUSICIAN WOULD WRITE ABOUT SWISS CULTURE?

Ha! gooood question!! that could get really interesting – do you know anything similar ever happened??

WELL WE HAVE HAD “SHADDAPA YOUR FACE” WHICH WAS JOE DOLCE, AN AUSTRALIAN-ITALIAN TAKING THE PISS OUT OF ITALIANS COMING TO AUSTRALIA. OR SOMETHING. BUT WHAT DO YOU THINK AN AUSTRALIAN MIGHT FIND ABSURD IN THE SWISS CULTURE?

I’m gonna check that italian ozzy out, sounds delicious!! well, about the swiss, lots of the well-known clichés are true unfortunately – they are basically money-greeding, superspoiled, neurotic losers, who are unable to relax a second, cause they are worried someone would come from the “ausland” and take away their wealth.
(but some of them are quite beautiful, big-hearted, talented motherfuckers as well!!)

HOW HAVE THOSE AUSTRALIAN BASED SONGS GONE DOWN WHEN YOU’VE PLAYED THEM LIVE IN EUROPE AND ELSEWHERE?

i always try to deliver an appropriate and sensitive verbal introduction. but usually feel like no one ever really gets the point who hasn’t been there himself – but believe me, i try my best!!!

LARRY BANG BANG IS SORT OF YOUR ALTER-EGO. WHAT MAKES SOMEBODY RE-INVENT THEMSELVES INTO A NEW CHARACTER?

The need to hide some parts of his personality and show off with some others that are more hidden usually.

A PSYCHOLOGIST ONCE TOLD ME BECAUSE I HAD BEEN PERFORMING FOR A LONG TIME IN COSTUME THAT I HAD NEVER LEARNT TO KNOW MY REAL SELF.

I’m always (and recently more than ever) asking this myself… sure there is a risk you might loose some of yourself in a costume, but maybe you really don’t miss and don’t need that anyway?? there’s also a chance you (me, us), are just drive forward our individual evolution. i guess it’s all fine as long as you feel fine with “yourself”.

I’m often content for a short time – that’s when i feel it’s definetly worth the struggle. more often i’m not too happy. i’m still searching to invert that unhealthy balance around without betraying my ideals. probably will still take a while…

CAN YOU TELL ME ABOUT YOUR FIRST EXPERIENCE EVER WITH A MUSICAL INSTRUMENT?

That was an overdimensional unstrung pizza shovel handycrafted by my dear dad – i used to perform and singalong to that “elvis presley 40 greatest hits” record you find twice on every fleamarket on my childhood bed… unfortunatly there’s no pictures, cause cameras weren’t sticking to the few people who witnessed those private shows back then. i was maybe 8 yrs old, must have been around 1982 – i remember having a hard time dislocating my face to imitate elvis’ deep voice in “don’t”…

WHAT IS YOUR RESPONSIBILITY AS AN ARTIST?

To keep being curious for new stuff. to to keep up a certain level of quality, or even improve, whereas possible. to entertain people, and try to foist some critical, subversive or just freaky contents on them. i like when i can inspire and encourage other people to produce weird stuff themselves.

LARRY BANG BANG’S INCREDIBLE ALBUM CAN BE FOUND AT HIS BANDCAMP PAGE.

View all posts by inasemimentalmood

This is a text widget, which allows you to add text or HTML to your sidebar. You can use them to display text, links, images, HTML, or a combination of these. Edit them in the Widget section of the Customizer.
Loading Comments...
%d bloggers like this: